Austin Hill delivered his best result of the season with a runner-up finish at Atlanta Motor Speedway (AMS) on Saturday afternoon. The driver of the No. 16 United Rentals Toyota Tundra scored his second straight second-place finish at his home track and helped seal a sweep of the podium for Toyota. The result vaulted the Winston, Ga. native up six positions in the NASCAR Camping World Truck Series point standings to sixth after four of 22 races.

Hill began the 130-lap contest from the sixth position under sunny Georgia skies and quickly asserted himself as a player in the opening laps. A three-wide move advanced him to fourth on the second lap and took the third position on lap five. Despite a tight handling condition and the front splitter making contact with the racing surface, Hill held his podium position for the balance of Stage one to earn eight points on lap 30.

Crew chief Scott Zipadelli and the United Rentals team gave Hill four Goodyear tires, fuel and a slight tire pressure adjustment for Stage 2 to combat the tight handling. After restarting ninth by choosing the bottom lane for the lap 38 restart, Hill rocketed to fourth in eight laps. He maintained that position to score another seven points at Stage 2’s conclusion on lap 60.

The balance of the event featured a 63-lap green flag run to the finish. Hill restarted fifth on lap 68 and utilized the bottom lane to immediately reclaim the third position. He challenged for the runner-up spot leading into the green-flag pit stops with roughly 30 laps remaining. Zipadelli and the HRE squad ripped off an efficient spot to earn Hill the second spot and positioned him to contest the lead. Hill maintained a steady hold on second position until the checkered flag and notched his fifth-consecutive podium finish on 1.5-mile tracks.

“When we had that last restart. I was trying to save my tires a little bit. I didn’t want to kill them right off the bat. When it was go time, I started matching Kyle’s (Busch) lap times. We had a green flag pit stop, got out in second. The pit crew did an awesome job today, but yeah, I kind of gave that gap up and I could never close it. I was matching his lap times, but I need to be a little bit quicker. Our United Rentals Toyota Tundra was really fast today. We had to fight a little bit of adversity today with restarts and stuff that happened on the racetrack. We had to rebound, but all in all a solid day. I wish we were racing here again because I love Atlanta Motor Speedway. It’s my home track. I can’t thank the fans enough for coming out and watching today. It was awesome to have you guys back. I just wish I could have got the job done. This is a fun place to run.” 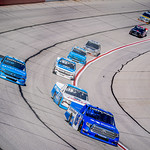 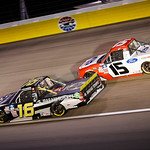 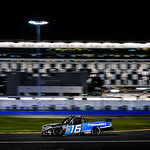 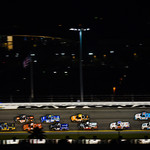